Osaka is a designated city in the Kansai region of Japan. It is the capital city of Osaka Prefecture and the largest component of the Keihanshin Metropolitan Area, the second largest metropolitan area in Japan and among the largest in the world with more than 20 million inhabitants.

Osaka was traditionally considered Japan's economic hub. By the Kofun period (300–538) it had developed into an important regional port, and in the 7th and 8th centuries it served briefly as the imperial capital. Osaka continued to flourish during the Edo period (1603–1867) and became known as a centre of Japanese culture. Following the Meiji Restoration, Osaka greatly expanded in size and underwent rapid industrialization. In 1889, Osaka was officially established as a municipality.

Today's Osaka is a major financial center of Japan. It is home to the Osaka Securities Exchange as well as the multinational electronics corporations Panasonic and Sharp. Famous landmarks in Osaka include Osaka Castle - which played a pivotal role in the Siege of Osaka and was featured in the 1980 American television mini-series Shogun - and Shitennō-ji - the oldest Buddhist temple in Japan.

The city's west side is open to Osaka Bay, and is otherwise surrounded by more than ten satellite cities, all of them in Osaka Prefecture, with one exception: the city of Amagasaki, belonging to Hyōgo Prefecture, in the northwest. The city occupies a larger area (about 13%) than any other city or village within Osaka Prefecture. When the city was established in 1889, it occupied roughly the area known today as the Chuo and Nishi wards, only 15.27 square kilometres (3,773 acres) that would eventually grow into today's 222.30 square kilometres (54,932 acres) via incremental expansions, the largest of which being a single 126.01 square kilometres (31,138 acres) expansion in 1925. Osaka's highest point is 37.5 metres (123.0 ft) Tokyo Peil in Tsurumi-ku, and the lowest point is in Nishiyodogawa-ku at −2.2 metres (−7.2 ft) Tokyo Peil.

Osaka is located in the humid subtropical climate zone (Köppen Cfa), with four distinct seasons. Its winters are generally mild, with January being the coldest month having an average high of 9.3 °C (49 °F). The city rarely sees snowfall during the winter. Spring in Osaka starts off mild but ends up being hot and humid. It also tends to be Osaka's wettest season, with the tsuyu (梅雨, tsuyu, "plum rain") — the rainy season — occurring between early June (average:Jun.7) to late July (average:Jul.21).[26] Summers are very hot and humid. In August, the hottest month, the average daily high temperature reaches 33.5 °C (92 °F), while average nighttime low temperatures typically hover around 25.5 °C (78 °F). Fall in Osaka sees a cooling trend, with the early part of the season resembling summer while the latter part of fall resembles winter. Precipitation is abundant, with winter being the driest season, while monthly rainfall peaks in June with the "tsuyu" rainy season, which typically ends in mid to late July. From late July through the end of August, summer's heat and humidity peaks, and rainfall decreases some. Osaka experiences a second rainy period in September and early October, when tropical weather systems, including typhoons, coming from the south or southwest are possible. 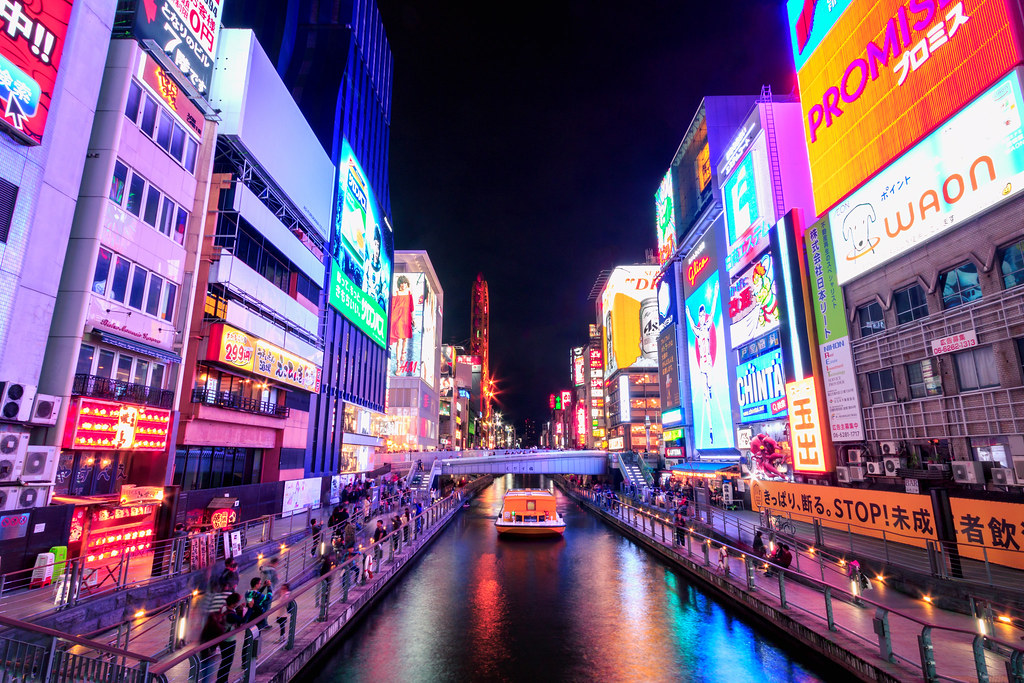